We are a family-owned business based in Australia who adore the job of designing lifelike toys that create a connection. We endeavour to turn them from toys to animal companions. We design them in-house with love to provide a lifetime of cuddles ensuring that every single forever-friend is soft and furry — made to be stroked, loved, and petted. 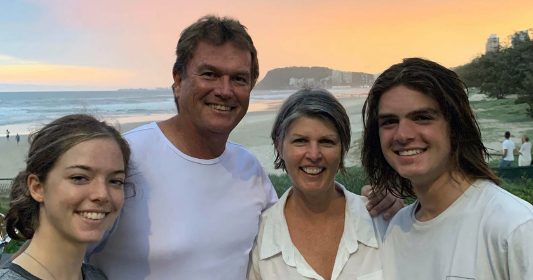 Our toys are born in Australia!

Welcome to our warehouse!

FurTastic Friends plush toys are manufactured to international safety standards, using ethical production and materials. Our premium-quality toys are not mass-produced — they are handmade with care to last.

Today we use modern techniques and provide FurTastic Friends around the world via our distributors, retailers, and wholesalers as well as direct to the public for those who need companionship, joy, and comfort. We are continuing the vision created so many years ago by the Bocchetta family. 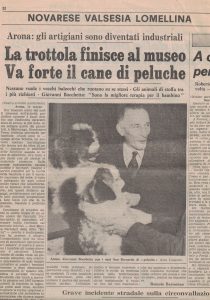 Giovanni Bocchetta is interviewd by newspaper

Bocchetta Plush Toys was established in 1948, in Arona, a small town on Lake Maggiore, in Piemont, a Region in northwest Italy.

The young couple met at a doll factory where they both worked. Giovanni was a traveling toy-salesman and involved in the manufacturing process and Clementina was in charge of the cutting and sewing departments for rag dolls.

They got married in 1941, during the Second World War, and continued to work at the factory until they decided, in 1948, to start up their own small business.

Bocchetta Plush Toys began on the ground floor of their home – where they lived with their two little children, Maria Lina and Luigi.  It was an old villa, named Isola Caprera (so-called by its former owner, a veteran of Garibaldi’s army of the Risorgimento War for the Unity of Italy in the Seventeenth Century).  The building stood in the middle of a great meadow surrounded by a private boundary hedge mixed with honeysuckle flowers. The villa had an orchard with several fruit trees and a vegetable garden which fed the family during the start-up phase of their business.

Learn more about our history

Our customers have counted on us for more than half a century to design beautiful, child-friendly, non-allergenic, machine-washable plush animals to engage the imagination of the young and the young-at-heart.

We are devoted to detail and our unique designs produce lifelike wholesale plush animals which delight children and soft toy collectors.

We are passionate about creating joy, comfort, and connection to people who can’t have their own living animals. We love that our forever fallinlovable Furtastic Friends can be used as therapy for people suffering from anxiety, autism, Asperger’s, dementia, depression, and other mental health issues.

We are also passionate about promoting conservation and supporting wildlife through our Australian animals. We love it that our toys can make a difference.

Our mission is to bring smiles, happiness, and joy to people of all ages, and know that the love of a Bocchetta toy will last forever.

We pride ourselves on designing our own unique range of friendly FurTastic Friends.

We love to give back

WE BELIEVE THAT CORPORATE SOCIAL RESPONSIBILITY IS ESSENTIAL FOR THE SURVIVAL OF OUR PLANET.

We strive to be a responsible business that meets the highest standards of ethics and professionalism and we support in proactiveness in every initiative to promote human rights, help communities, and protect our natural environment.

An ethical supply chain is of the utmost importance to us.  We ensure that our factories subscribe to the ICTI Ethical Toy Program which requires them to uphold minimum standards to support the rights and well-being of factory workers. The audits address discrimination, disciplinary practices, employee representation, employee practices, environmental and chemical safety, modern slavery, workplace safety, underage labour, wages, and working hours.

We are a Fair Trade’ supporting workplace

Fairtrade supports marginalised farmers, workers, and the environment in developing countries, enabling them to build a better and more secure life for themselves, their families, and communities. The Fairtrade Mark shows that the Fairtrade ingredients in the product have been produced by small-scale farmer organisations or plantations that meet internationally-agreed Fairtrade social, economic and environmental standards. Bocchetta Plush Toys strongly believes in fair and ethical procurement for our organisation and commits to purchasing Fairtrade certified products.

Our devoted attention to detail and unique designs produce lifelike stuffed animal toys that turn the love lights on in the eyes of children and soft toy collectors of every age.High density 850-1100 gsm acrylic material is used to make our fabulous plushies. This makes them much safer than those made with polyester, given that high-density fur does not ‘malt’ and is difficult to pull off.

Our especially chosen, made and dyed fabrics make our toys super soft. The colours are bright and consistent because these premium quality high-density fabrics absorb and retain inks.

On the production side, our factories only use highly skilled sewing staff capable of great intricacy in their work. Most of our animal toys have additional panels which help to make them look more realistic.

FurTastic Friends will be loved, fed, and invited to join many messy, dirty games. To keep them looking (and smelling) their best, give them a good shake and brush them with a regular pet brush.

They can be placed in a plastic bag with cornflour — shaken, removed and then dusted off to remove light dust and dirt. Be mindful not to add water during this procedure.

Deal with a spill immediately. Shake the toy outside or over a towel and then use a damp sponge to blot or cloth to wipe any leftover residue away. Finish by blotting with a dry towel. Repeat as necessary.

Our toys can also be thrown into a washing machine. Best is to use a low-temperature on a gentle cycle in Woolite, Dr. Bronner’s, Johnson and Johnson Baby Shampoo, or your preferred hypoallergenic washing detergent. Putting the toy inside the leg of a pair of women’s nylon hose, a pillowcase, or a laundry bag will protect your washing machine from any stray fur.

Leave out in the sun to dry.

The toys can also be dry-cleaned.

Lee-Ann supervises and controls all strategic, marketing and business aspects of the company.

“I love animals, old people, dancing, hiking and the beach. I love to bury my face in Mozart’s fur and I adore Willow because she is so round and chubby.”

Mark is our product designer and works hard behind the scenes to make sure our soft toys are designed just right.

Carolyn is the friendly face who looks after your registrations, orders, freight and invoices. She overseas everything on the administrative side of the business.

“I love life, my family, socializing with friends and crocheting. I love Hilary because she is so soft and cuddly and the detail. I adore Paris because she is so realistic sitting on his cheek bone and his funny jowls.”

“..is very important to me. I love Philly because he is different and Cha Cha because I loved monkeys for as long as remember. I also love the mini bilby just because its so cute.”

Carole drops in whenever required to help Chantelle with the gathering, primping & packing of your orders.

Trainee - office and warehouse (and nearly finished her internship)

Kayleigh has helped with picking, grooming and packing. She has also been involved in airbrushing, repair and washing of toys in the warehouse. In addition to this, she has worked on the back end of our website and created written and visual content for our social media marketing including photographs, videos, canva posts, sourcing of quotes and writing of articles. She also helps with data entry, filing and other office administrative tasks.

"My favourite is Calypso the Cheetah because she reminds me of my home in Botswana where I grew up."

Ambra is learning all about freight, office administration, marketing and customer service upstairs and everything about our stock, quality control and picking and packing in the warehouse. She is also learning how to sew and clean the toys and how to use the jewellery making tools to add keyrings. She is also very involved in customer service including order follow-ups, backorders and sales and marketing.

Our Casual staff assist us with unloading of containers, building of shelves, repair and washing of toys, social media content and various other small but essential jobs

“Our parcel arrived so quickly and the look on the children's faces was so priceless. They feel safe and protected in their beds at night with Marshall and Storm watching over. Thank you!”

“We will forever remember our trip to Australia, as we returned home with a beautiful koala! She'll always remind us of the Australian hospitality. Thank you!”

“Just wanted to say how great your products are. The black Staffy I ordered was for my mum who just lost her 12 yr old Staffordshire. Your stuffed dog has brought some peace to her - Thank you for a great product and prompt service.”

FurTastic Friends are uniquely handcrafted by Bocchetta Plush Toys. We are a family-owned business, based in Australia, who adore the job of designing lifelike toys that create a connection. We endeavor to turn them from toys to animal companions. We design them with love to provide a lifetime of cuddles ensuring that every single forever friend is soft and furry and made to be stroked, loved and petted.

FurTastic Friends are uniquely handcrafted by Bocchetta Plush Toys. We are a family-owned business, based in Australia, who adore the job of designing lifelike toys that create a connection.